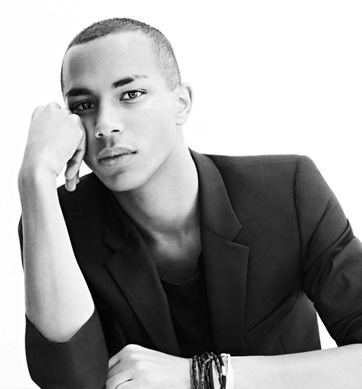 If you haven’t heard already from the rumors circulating around Olivier Rousteing on your twitter feed its true. The 25-year old designer was named the new designer for the Parisian powerhouse, Balmain, founded by the late Pierre Balmain, known for his tough lux edge. Its pretty much the “cool girl’s” uniform of spray on tight leather pants, motorcycle jackets, and rock n roll appeal. The shift in designers stemmed from a falling out of the previous designer Christophe Decarnin who left earlier this month due to strategic disputes with chairman, Alain Hivelin. Having worked for Roberto Cavalli for five years, Rousteing will use his experience to continue the brand’s rock glamorous influences.

You may not be too familiar with the line Balmain, but I assure you that you have seen a celebrity or two rocking the coveted pieces that made you question which designer are they wearing. If only I could get muster up the nerve to put these pieces on a credit card to rock in a blog post or two…then again, that’s just not me…a big spender on an impulsive splurge is something that I won’t do. I’d rather be fashion deprived than homeless………i think.

Sometimes puppies make a person’s heart melt, or the laugh of a toddler…I wish I could say the same, but for me its definitely this blazer. Wow that really made me sound like I have an ice sculpture for a heart, but I’m purely *style lusting* Can you blame me?