Ask anyone of my friends or family members and they will tell you that I am a pack rat right down to the core. There are just some things that I refuse to give up, donate, or throw away into the dumpster never again to be remembered or admired. So because of this I have a stash of clothes that haven’t been worn in years, just begging to make their debut on the cusp of the next trend cycle, or at least I hope so. I usually end up wearing them anyway just to mix it up a bit so my clothes are never fully retired. But getting back to my pack rat problem, I think I have a slight compulsive hoarding problem when it comes to clothing. The inability to throw anything away-like my strawberry shortcake t-shirt that my parents gave me when I turned 1…yes, I still have it and its chillin’ in my closet, seriously. I’m sure I’m not the only one with this dilemma. Maybe one day I’ll start a support forum for “apparel hoarders.” (ohhh idea!)
Anyhow, I pulled this Bart Simpson t-shirt from the archives which I’ve owned since I was a teenager so don’t think I just lucked up on a cool find at a thrift store. Not that Vogue is featuring the comeback of “Bartmania” or anything. For me, this shirt has so many memories! How can anyone forget the piles of paraphernalia that clogged up the aisles or retail stores worldwide when Bart Simpson made his debut on FOX as a character on The Simpsons? His yellow spiky hair and protruding eyes were plastered on almost every printable object, ordering you to eat his shorts or not to have a cow. His rebellious nature against order and conduct infected the minds of teenagers who were itching for a reason to rebel across America. As foul mouth as he was, Bart was their hero. 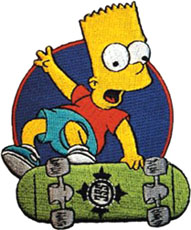 As with every popular brand, people started to bootleg the cartoon icon into various interpretations, leading Bart into a horrendous case of schizophrenia: Teenage Mutant Ninja Bart, Air Simpson Bart, Stoner Bart…and the list goes on.
I don’t even remember how I acquired this shirt but this is someone’s interpretation of Rasta Bart. I soooo should not even be wearing this shirt as a Jamaican! (What in the stereotype?!) I might as well be wearing a t-shirt of the Red Stripe dude in the beer commercials<<<I HATE that commercial!


I customized a pair of glasses to go along with the look:

Did I mention that I made these glasses:)

I can still hear his annoying voice in the Butterfinger commercials:
“Nobody better lay a finger on my Butterfinger!”
Follow me on www.twitter.com/physicalcanvas